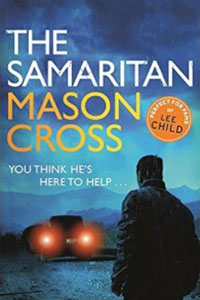 So it took me two years to finally come about and read the second book on Carter Blake and his “adventures”. I had The Samaritan on my to read list for a long time now, and it’s always nice to have a follow-up, if the first book was so exciting and thrilling. While the first one, The Killing Season, was quite action focused, the second is more on the criminal fiction road with a local police officer named Jessica Allen being the second-third point of view. Like in book one, Carter is written as first person providing the first-third point. And the antagonist, The Samaritan, provides the third-third view from the opponent’s side. It’s an interesting concept that distincts Mason’s writing from other thrillers I read so far. On the other hand, it unfortunately reduces the significance of Carter Blake in the story.

So it’s revealed early in the story that Blake knows the serial killer acting in L.A. from his past, which makes eliminating The Samaritan quite personal. He kind of “sneaks” into the investigation supporting the assigned police officers Allen and Mazzucco. Both parties contribute to finding the killer quite equally, either by action or investigation. And it is thrilling to see Blake in action, especially when things do not go the way he planned. In the end it becomes a close call on catching the bad guy.

The Samaritan is one hell of a suspense novel, that I can tell. There are some minor scenes I would have dropped for irrelevance and which steal a bit of the pace. But this is grumbling on a high level. I was not really surprised by how the plot went, but the gripping writing kept me thrilled at all times.