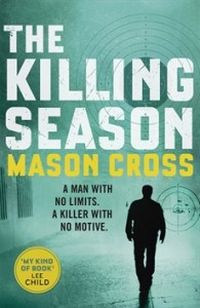 I came across (no pun intended) this book because of a tweet by Steven Dunne, whose Reaper series I already wrote about. The Killing Season is the first book in the series of Carter Blake, some kind of ex-mercinary on his mission to help finding people. Well, I don’t spurn a recommendation by a great author, and I don’t regret it for one minute.

In this book, Carter Blake (who claims it not to be his real name) is hired to help the FBI finding the fugitiv serial sniper Wardell. Of course, with very happy FBI folks. Not. But he very quickly shows his abilities in percieving the escape route of the sniper, who is not really trying to escape but follow his plan of attack on innocent and other people. The great thing about Blake’s hunt, in my point of view, is that his reasoning seems plausible. Of course, there are quite some coincidences taking place, but to me it works out. And it’s very supportive that Blake always is a bit late at the scene, so it does not end on the first shooting.

The book is written from three perspectives, Cross takes the first person view on Carter and third person on Agent Banner and Caleb Wardell. The writing supports the tension built by the story line and makes it a great read and page turner. It’s quite a straight forward story, though, with few minor twists so it becomes a splendid action thriller. I’ll definitely look into its successors.