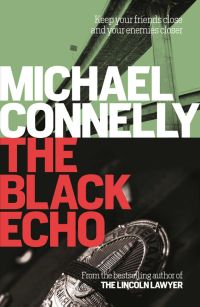 So, after seeing the fourth season of Bosch, I decided it is time to read the novels it is based upon. Actually, Michael Connelly is also involved in the TV series that is derived from his novels. The Black Echo was published in 1992, and thankfully many changes have been made from the novels to TV, so I could enjoy the first book with a fairly new storyline.

In the novel, Harry Bosch is still the cop, has a bit different background because of the time frame (Vietnam veteran instead Golf war), but in the end he is quite the same kind of person. Maybe even a bit less sympathetic than in the television series. There is also Jerry Edgar and Eleanor Wish in the novel, but the roles are differently set. And while the story of The Black Echo was adapted as season 3, it span quite a different world, following a former fellow from the war named Meadows being murdered for cover-up.

One learns quite a lot about the man Harry Bosch and his history in this first book. It becomes clear that he is a man of principles, a stubborn and self-confident kind of guy. There seem to be no friends in his life and he surely makes none the way he behaves. Of course, he gets to solve the case, and it turns out rather different than the reader might suspect.

I like the style, Connelly develops the story and its characters. There seem no usual types of men and women, where I think the women come very short (maybe the 90s style). And, as said, the resolution came quite unexpected. I’ll surely follow up on this.

Back to homepage
We use cookies to ensure that we give you the best experience on our website. If you continue to use this site we will assume that you are happy with it.Ok