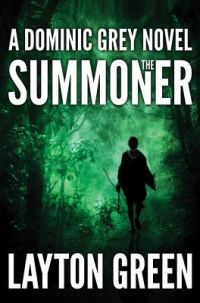 So, more than a year has passed to finally get around to book number 1 of the Dominic Grey series: The Summoner. I wrote about how I started with book #3 in autumn 2016, but of course, I had to go back for the first one. Well, I can say that it did not disappoint. I still love these characters and Layton Green’s writing.

The Summoner actually does describe the beginnings of the cooperation between Grey and Professor Radek. Their first case, where Grey still works for the government, at the embassy in Zimbabwe. Radek works as a consultant on spiritual matters on their case of the mysterious disappearance of a government employee during some cult’s ceremony. Of course, he is not the only missing person, so the investigation starts into the “Julu” cult and the seemingly ruthless high priest N’anga. For legal matters, the Zimbabwean government liaison Nya Mashumba accompanies Grey, who follows her own agenda.

What made this book great to me is that one can really dive into the sceneries. Layton Green lived in Zimbabwe for a while and has researched the region, the political essence and surely the people. Hence, not only the protagonists but the whole story is vivid and feels real. Even though, unbelievable things are happening. Of course, I immediately put book number 2 on my to-read list (which turns longer and longer).